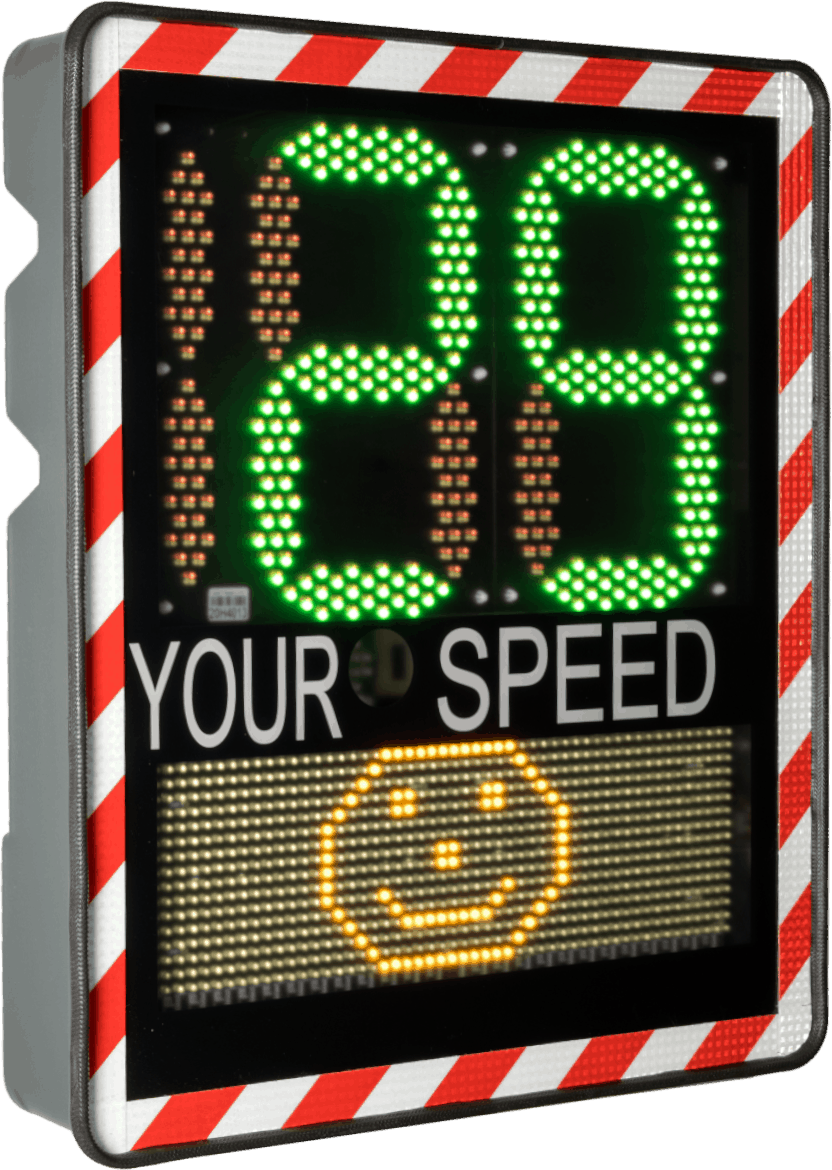 Unlike what one might think, a radar speed sign has nothing to do with a repressive radar that verbalizes over-speeding. On the contrary, it allows motorists to be alerted of their speed, which is sometimes excessive. Thus, if drivers exceed the maximum authorized speed, they will be informed in real time. These radars are generally placed in sensitive areas or areas frequented by vulnerable road users, such as at the entrance to an urban area, near a school or even at a dangerous intersection.

As you will have understood, the purpose of a radar speed sign is to make road users aware of the speed at which they are driving. Much more effective than a static traffic sign, the radar speed sign limits speeding by making everyone aware of it when approaching sensitive areas.

Very easy to handle and requiring no maintenance, they make it possible to manage road safety around dangerous areas. Thanks to a radar allowing the detection of vehicles beyond 200m, each driver can then adapt his speed.

What are the characteristics of the I-SAFE?

As soon as a car approaches an I-SAFE radar speed sign, the latter will display, alternately, up to 3 messages of your choice. For example, the first message can show the speed with digits of 39cm height. This allows the message to be seen at a great distance. You also have the possibility to customize the displayed texts, such as “Have a nice trip” or “Slow down!”. Finally, you can choose from a wide library of pictograms.

The message can be displayed in red, orange or green. This allows to reinforce the impact of the message to the motorists.

Finally, our I-SAFE radar speed signs can collect data on road traffic. In addition, neither the weather nor the temperature affects it. Therefore, regardless of the weather conditions, you can trust it to improve the safety on roads.

Do radar speed signs act as a speed trap?

Unlike a speed camera, a radar speed sign does not penalise a motorist who exceeds the speed limit. Indeed, its primary aim is to make drivers aware that they are no longer respecting the traffic laws. By displaying their actual speed in red if the limit is exceeded, motorists are encouraged to slow down. If you drive within the speed limit, the radar will display your speed in green. Some radar speed signs may also display, below the speed, the number of driving licence points lost or the amount of the fine for speeding. This is merely a preventive measure to encourage the driver to change his or her behaviour.

If you have just purchased an Icoms Detections radar speed sign to regulate and analyse the speed of motorists in urban areas, you can install it in the zone that suits you best. Indeed, the installation is simpler than that of a fixed speed camera. In addition, the I-SAFE comes with a complete starter kit and the necessary mounting hardware. All you have to do is mount the device on a pole using the two hooks on the back. If you have chosen the solar panel option, you will also find the appropriate kit and explanations on how to plug the solar panel. Without solar panel, your radar speed sign can also run on a rechargeable battery or on street lighting.

What is the price of the I-SAFE?

The I-SAFE has many features that vary depending on the power system you choose. In addition, the options you add will also affect the final price of the device. Therefore, to get the best quote together with further information, please fill in our contact form.

Discover our range of products