How the TMB-134 makes intersections agile thanks to queue detection 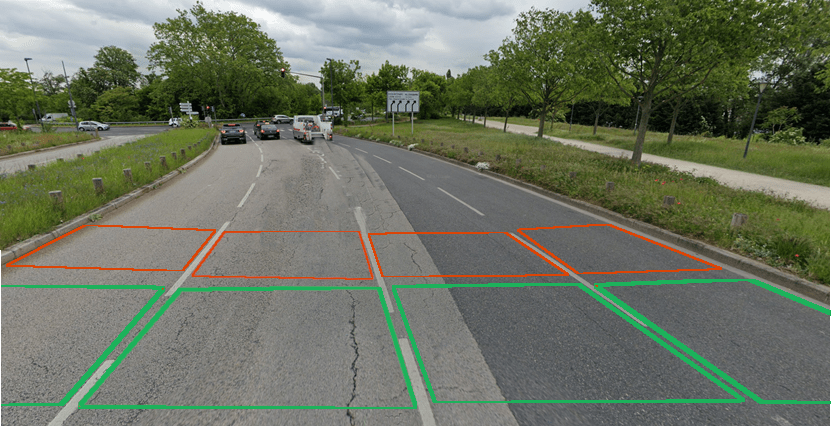 Like many other European cities, this city opened new cycle paths during the lockdown period. Widely used, they meet a real need and provide many benefits for their users and the environment. Their creation, however, required the removal of a bypass between two branches of this roundabout, thus generating traffic jams during rush hour.

In order to make traffic more fluid, a solution was needed to make the intersection responsive quickly, as it was not equipped with sensors and was operating on a timer. The objective of the planner was to switch the traffic light schedule according to queue detection.

The planner opted for the TMB-134 which in this case replaces eight inductive loops. Placed in an unusual configuration, 25 m from the stop line, the four leading virtual loops remain activated as long as vehicles are stopped or are moving in their area. The four zones at the back are activated on detection of movement. The logic of the intersection controller thus has the sensor input that allow it to perform queue detection for each of the lanes.

The installation involved two people to install the sensor on the pole of the existing traffic light, at a height of 5 m. The radar is connected at the bottom of the traffic light, where it takes its power and is connected via RS-485 to the relay board installed in the intersection controller, transforming the information from the radar into dry contacts. A technician and the representative of the road management authority set up the TMB-134 and performed the functional test using the software supplied with the radar.

This intersection became agile in less than two hours, without stopping traffic, without touching the existing cabling and without civil engineering work.